Several years ago I stumbled upon the Ayatana Research Program : Artist residencies (fully immersed in Science) that take place in different location around Canada. Residencies at the time were taking place in Nova Scotia, that sounded incredible- I applied and was accepted! However, before Ayatana’s residencies I had applied to a residency in Iceland… when I was accepted to the Gullkistan Centre for creative people in Laugarvatn, Iceland I had to obviously accept, which meant having to decline Ayatana’s invitation.  To my surprise I received a very flattering email in March 2017  asking if I would be interested in attending a special residency taking place in the Gatineau.

Ayatana residencies are designed to enrich the practice of visual and conceptual artists.  This residency will host only five or six selected international artists. This action packed research residency leaves little time free for making art, so Ayatana residents are not expected to produce work during the program. We are looking for adventurous artists interested in learning who have a willingness to participate in spontaneous development of early stage ideas with a small group.

The Ayatana Artists’ Research Program is looking forward to assisting Tosca Teran in the realization of her artistic goals while she is artist in residence on the 2017 Infinitesimal research expedition.
Infinitesimal is designed for artists to study the natural world through a variety of microscopes with the guidance of Canadian scientists and other experts.

The residency offers many unusual opportunities for Tosca to experiment with microscopy including visiting 5 different laboratories; the Andrew Pelling Laboratory for Biophysical Manipulation and a Live Cell Microscopy Lab to use a dissecting, scanning electron and petrographic microscopes and learn about high resolution scanning. She will meet many experts with diverse relationships to the infinitesimal.

The program is intended to foster conceptual development of early stage artistic endeavours in the company of likeminded artists and scientists. The residency will facilitate the collection of material to be used in resident’s art practices and give them new tools to take home.

Mycology:
Hike and forage with a mushroom expert in the Gatineau forest with a pocket microscope and macro lens.

Geology:
A guided hike to a fossil bed with a Paleontologist.

Be charmed by the magic of looking at minerals through the petrographic microscope.

Entomology:
Hike Gatineau Park with an entomologist who will describe the local insects.

Lure moths to observe with local artist Jim des Rivieres who will give a workshop on high resolution scanning and large format printing of insects.

Visit the Canadian National Collection of Insects and look through their microscopes.

Visit the Andrew Pelling Lab at the Center for Interdisciplinary Nanophysics to learn about biophysical manipulation.

Āyatana (Pāli; Sanskrit: आयतन) is a Buddhist term that has been translated as “sense base”, “sense-media” or “sense sphere.”[1] In Buddhism, there are six internal sense bases (Pali: ajjhattikāni āyatanāni; also known as, “organs”, “gates”, “doors”, “powers” or “roots”[2]) and six external sense bases (bāhirāni āyatanāni or “sense objects”; also known as vishaya or “domains”[3]). Thus, there are six internal-external (organ-object) pairs of sense bases:[4]

From the 19th of September to the 26th I took part in the Infinitesimal Ayatana Research Program. Situated in the beautiful Gatineau forest (in Chelsea), in an equally lovely 200 year old, refurbished farmhouse overlooking the river. Our days were spent in research facilities, laboratories and museums located at Carleton University, Ottawa U and the Canadian Museum of Nature. Our days were shock full of learning, exploration and knowledge/inspiration gathering- in mass! I mention the Buddhist definition of Ayatana because that is exactly what this research program was about; igniting all the senses!

Day 1: I arrived in Ottawa via Porter airlines, took the bus to Byward market. We were scheduled to meet at the National Museum of Canada for noon. It would turn out that only 4 of us could make this residency. The fantastic 4! I have to say that out of all the residencies I’ve experienced so far, this one was the best concerning diversity of artist’s use of mediums, but we were all like-minded, focussed and hit it off instantly.  Alexis Williams is the director of the Ayatana programs. We were each given pocket microscopes for our adventures ahead, and to keep!

Day 2: After a quiet fog filled morning (I woke up at 4am!) listening to insects and birds call in the sunrise, we had a DIY breakfast before heading into Ottawa to Carleton University. First up was visiting the Carleton Nano Imaging Facility (NIF), home to two state-of-the-art Electron Microscopes, Tescan VegaII XMU SEM and FEI Tecnai G2 TEM.

The tungsten Tescan VegaII SEM images specimen surface profiles and topographies at variable pressures. It is operational at high vacuum for maximum resolution or low vacuum for direct imaging of fresh unprocessed biological specimens. It is equipped with Oxford X-ray detection systems (INCA EDS) for elemental analysis and quantitative mapping. A Cryo stage is also available for the low-temperature operation.

The FEI Tecnai G2 TEM reveals specimen information down to the atomic level where it reaches a stunning 1-million magnification. The FEI Tecnai G2 features a field emission source which makes the ultra-high resolution imaging possible – a spatial resolution as small as 0.144nm can be achieved. The Tecnai G2 is equipped with the latest Oxford X-ray detection systems – Aztec EDS which offers high-degree accuracy at a fast data acquisition speed.

Physicist Jianquan Wang aka JJ introduced us to this amazing technology. We ‘plated’ and scanned a moth antennae, a fly, a moth head, silk cocoon, dragonfly wing, blue fly, and yarrow.

JJ was super enthusiastic and accommodating. He explained Back Scatter technology, the vacuum plating equipment, and demonstrated how to take samples (dry in this case) and prep them for plating. He is also very funny. 🙂 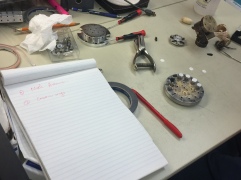 JJ asked me if I sang opera 😉 We could have easily spent the entire day with JJ and his SEM, chatting sciart, the future, bio-art, etc., but we had another appointment scheduled with the Petrographic lab and Dr. Beth Halfkenny.

Looking a super thin slices of minerals is interesting. I never thought to look into Petrographic saws for cutting glass! SO, this visit was also incredibly inspirational. Also, looking at basalt (from Hawaii with Olivine inclusions) with a polarizing lens.. whoa. 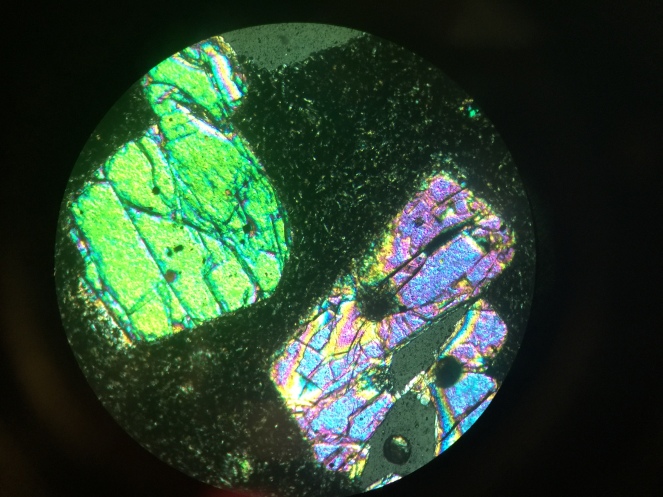 I made several videos while moving the specimen in circles- I will post later. Dr. Halfkenny also shared this seriously cool microscope hack with us-

I plan to build one. On our way out.. again, we did not want to leave! She showed us some fossils she really loves.

This little guy and this most spectacular Crinoid. !! 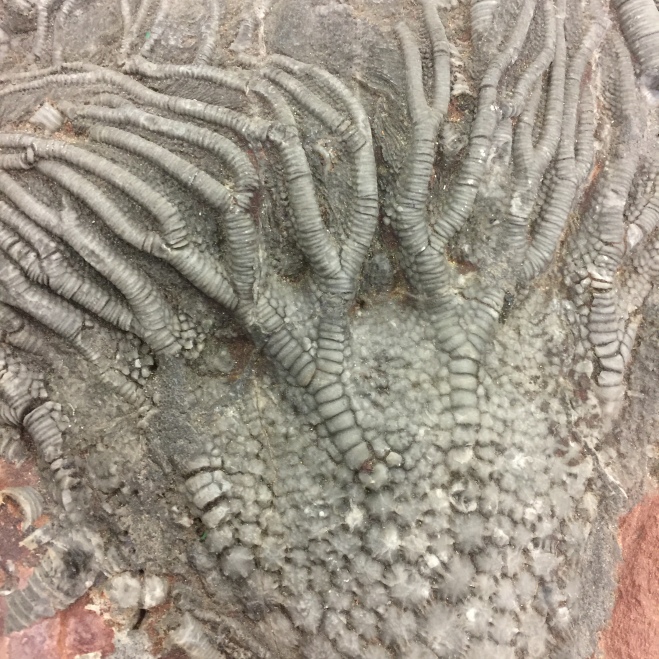 This Jasper specimen (below) shows oxygen just starting to form on the Earth’s surface. 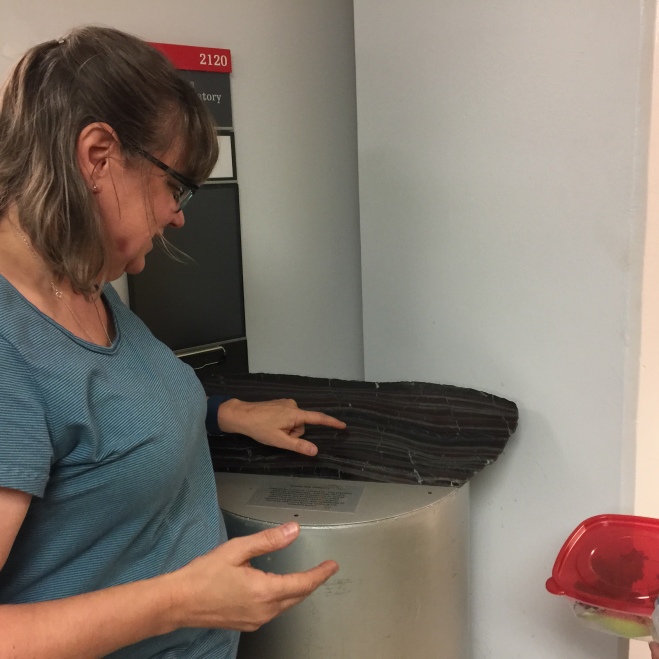 After this incredible day of science we headed to the LCBO then back to the house to decompress, write, discuss the day and share new exploding ideas!

This site uses Akismet to reduce spam. Learn how your comment data is processed.