MoCA and the OSC have partnered up for a year-long pilot project, awarding artists a 550 square foot studio space on the 4th floor of the Museum of Contemporary Art Toronto.

This residency is part of the Science Centre’s Idea Projects;

Idea Projects provides studio space to artists interested in science and technology. We create a forum for the collaborative exchange of provocative ideas and methods. In patronage, the Science Centre strives to accelerate the creative process by mobilizing interdisciplinary support and forging new partnerships in cultural, scientific research and innovative fields. During their residency, artists plan, create, revise and share their respective art projects. Through public programs and open studio events at MoCA, they inspire awe and spark interaction and co-creation with visitors. Reach and impact of their work is further extended when exhibited at the Ontario Science Centre (OSC).

During my MoCA residency, I will be keeping a daily Blog, here and sharing images on my Instagram account @MothAntler

Through this residency opportunity formed The Alien Agencies Collective; myself, Joel Ong, Nicole Clouston, Günes-Helene Isitan and Elaine Whittaker. Together and separately we are using Space/Panspermia as a collective theme. 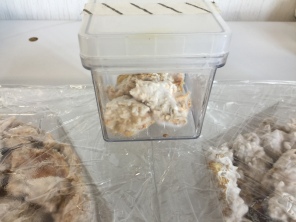 An 8’x16’ geodesic dome grown from living mycelium. Inside, a living mycelium sculpture generates sounds (bio-sonification) that are translated to MIDI creating a non-human derived soundscape. Visitors may interact with the Mycelium sculpture, having their bio-data read and translated through the fungus. The European Space Agency is exploring whether fungi could be used to grow buildings, like labs and other facilities, in space. Nasa is also examining whether their Mars missions could grow surface structures on the planet itself. NASA is considering producing on Earth a flexible plastic shell seeded with mycelium and then activating the fungal growth once on Mars. Mycelium provides a golden example of circular economy. Waste comes in as input for the mycelium and the resulting material is potentially biodegradable, just like wood. Mycelium has amazing properties. It is a great recycler, as it feeds off a substrate (like sawdust or agricultural waste) to create more material, and has the potential of almost limitless growth in the right conditions. It can endure more pressure than conventional concrete without breaking, is a known insulator and fire-retardant and could even provide radiation protection on space missions.

Human exploration of space requires minimal volume and mass of materials to be transported from Earth. In situ manufacturing of fungal structures will require transporting a minimum amount of fungal spores to space which would then be used to inoculate local organic material for growing bio-composites in situ.

The Mycelium Martian Dome project imagines what these structures might look like through a Science Fiction lens and how collaboration with non-human organisms could lead to humanity’s acceptance of their connection with Earth’s natural environment {Tentacular Thinking}, and each other, rather than continued destruction leading to evacuation for the 1%.

is generously providing all sound gear that will be used within the Mycelium Martian Dome!

Mushroom Guerrilla is providing insight, assistance and time towards this project time and mycelium cultivating expertise in growing mushrooms and will also be assisting me in growing the mycelium brick forms.

This site uses Akismet to reduce spam. Learn how your comment data is processed.